History of the Atlantic Classic Championships

I remember it as clearly as yesterday. Sitting in my car and driving to Moncton, I could hardly contain my excitement at the thought of competing in the 1978 Maritime Bodybuilding Championships. Many years have passed since my first bodybuilding competition I had become very good friends with Dieppe’s Ron Gaudet, Mike Aube, and Ti-Jean LeBlanc. We had all gotten together and re-organized the New Brunswick Bodybuilding Association electing Ron as President and me in the position of Secretary-Treasurer. Being from Fredericton and speaking only English I had very little in common with Ron, Jean, and Mike who all were French but treated me like royalty. In spite of our different cultural backgrounds, our mutual love and passion for bodybuilding had brought us together.

Ti-Jean wins his first Atlantics in 1978

In those days there were no fancy commercial gyms, most of us trained at our local YMCA, which in most cases were poorly equipped. However, the boys in Dieppe really had it together, and had transformed an old school into a first rate workout facility. It was called the “Dieppe Bodybuilding Studio” and along with Ron, Jean, and Mike I had some of my most inspirational workouts there!

Following his 1975 New Brunswick Bodybuilding Championship win Ti-Jean was just beginning his career as one of the best amateur bodybuilders in Canada. He competed in his first Canadian Nationals in Calgary, Alberta in 1977. Unfortunately, Ti-Jean entered the competition far too bulky and was outclassed by the much better conditioned competitors. It was obvious that Jean required more contest experience.

So under Ron’s leadership the Dieppe Bodybuilding club decided to promote the very first Maritime Bodybuilding Championships in the spring of ’78 at the Mathieu Martin High School. I suspected that the show was motivated by Jean’s need to get more contest experience before hitting the national stage again. The competition was open to anyone in the Atlantic region. Up until 1978 there were no officially recognized Atlantic competitions; although there had been a few inter provincial competitions in the 60’s where athletes from Nova Scotia and New Brunswick participated such as Saint John’s Norm Wickens and Bob McDerrmot.

As I got closer to Moncton my excitement and anticipation grew, and with good reason! Ron had told me that 1977 Mr. Canada and Mr. Universe Roy Callender would be guest posing. Jimmy Caurso, the worlds top physique photographer and IFBB General Secretary Winston Roberts would also be on hand to officiate and oversee the event. For anyone who loved bodybuilding as much as I did, it was shaping up to be a dream weekend. 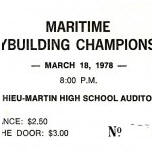 I had been training very hard for the past year, but when I got a look at Ti-Jean back stage, it was game over. Jean had literally transformed his former bulky physique into a chiseled work of art. He had won the first Maritime Championship title long before stepping on stage.

I lost a close decision in the tall class to Dieppe’s big Moe LeBlanc who just over powered me with his mass. Being intensely competitive I took the loss hard but it only served strengthen my resolve to get better.

In those early days we called it the Maritime Championships, which later was changed to the Atlantic Bodybuilding Championships. I was as outspoken in those days as I am today. I have always voiced my opinions freely and bragged that I could do a first rate job of promoting the Atlantic’s in Fredericton! So Ron, Ti-Jean and Mike challenged me to put on the show! Along with my good friend Bryon Webber we promoted the 1979 Maritime bodybuilding Championships at the Nashwaaksis Junior High School in Fredericton. 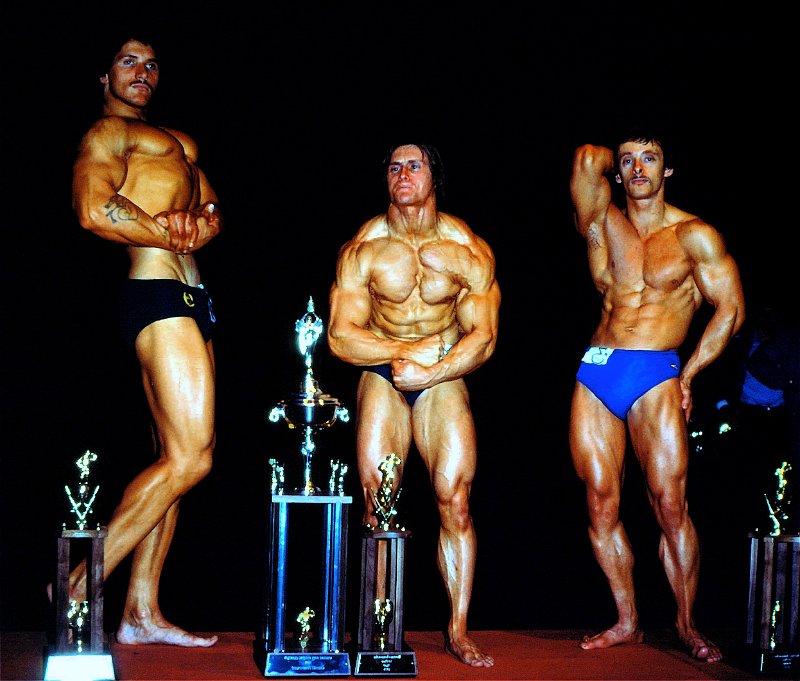 This contest turned to be a defining event in the history of the Atlantic Bodybuilding as this was the first time athlete from Nova Scotia, Prince Edward Island and New Brunswick all participated at the same competition. It was at this show that I met Bob and Marie Jay who shared the same passion for bodybuilding as I did. Bob and Marie were responsible for bringing bodybuilding to Prince Edward Island in the 80’s and early 90’s. Fredericton’s ripped Steven Howe went on to win the overall in a pose down against Bathurst’s Robert Basque and myself. I was elated that I had won the Middleweight division.

Bob and Marie Jay went on to form the PEI Bodybuilding Association and along with Nova Scotia’s John MacLellan and Harry Alexander who represented Nova Scotia the Atlantic Region now had some strong leaders. Bob and Marie were anxious to promote the sport on the island so they were encouraged to host the 1980 Maritime Championships in Charlottetown. A first for the Island, the competition was a huge success with New Brunswick’s awesome Robert Basque winning the overall title. 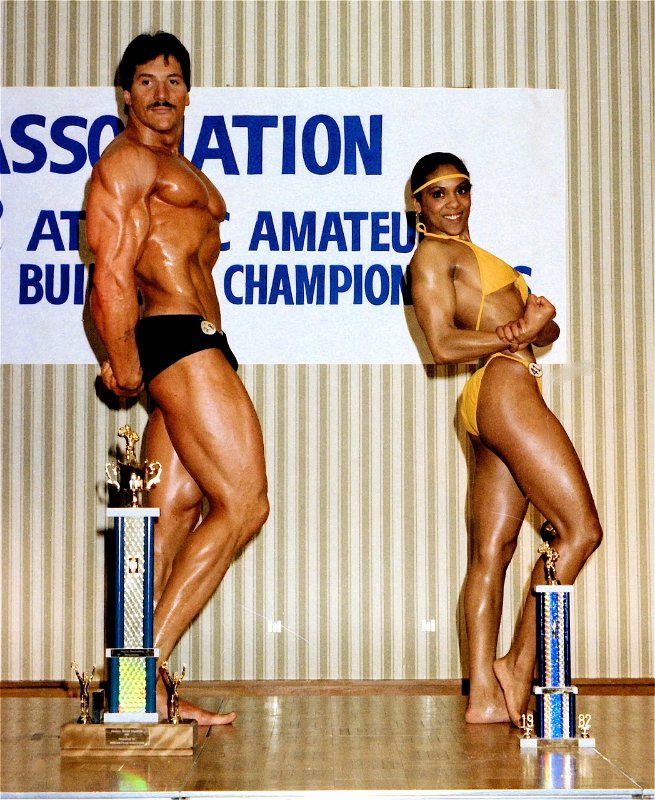 The name was subsequently changed to “The Atlantic Bodybuilding Championships” with the 1981 championship heading to Halifax, Nova Scotia. We now had a truly Atlantic event which was officially recognized by the Canadian Bodybuilding Federation as one of the most prestigious regional events in Canada. In fact the Atlantics was made an official qualifier for the Canadian Nationals.

Around this time I met and became good friends with Dieppe’s Len Collette who was a keen bodybuilding fan and offered his services to help the New Brunswick Association. Fortunately, Len came along at the right time as current President Ron Gaudet had stepped down, leaving us in a difficult situation. Always looking for a challenge, Len stepped up offering his services as president. 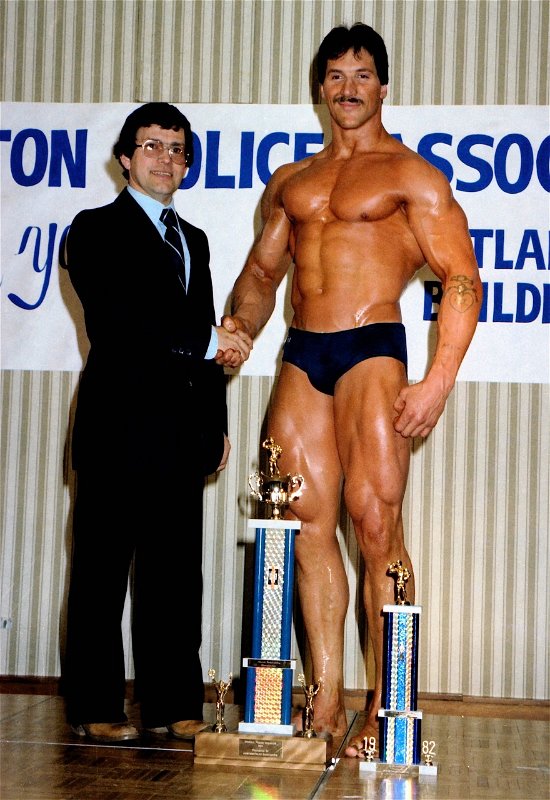 He was perfect for the position, as he traveled throughout the province and had the opportunity to stop at every gym to spread the word on New Brunswick Bodybuilding. Under Len’s competent & enthusiastic leadership, New Brunswick Bodybuilding prospered with our association becoming one of the most stable and highly respected in Canada. In the early 80’s and 90’s the Atlantic Championships were circulated around Nova Scotia, Prince Edward Island, and New Brunswick. In 1982 the Atlantic’s returned to New Brunswick and was promoted by the Moncton Police Association at the Hotel Beausejour with Dieppe’s hometown favorite Moe LeBlanc taking the overall title.

For the next 14 years the Atlantic’s alternated between the three Maritime Provinces with many memorable and historic battles being fought. Some of these winners such as Bruce Patterson, Sandy Ridout, Ti-Jean LeBlanc, Mike Griffin, Keith Langford, Bob Taylor, Billy Mackie, Adrian Noel, Billy Mackie and Greg Doucette all went on to do very well nationally. 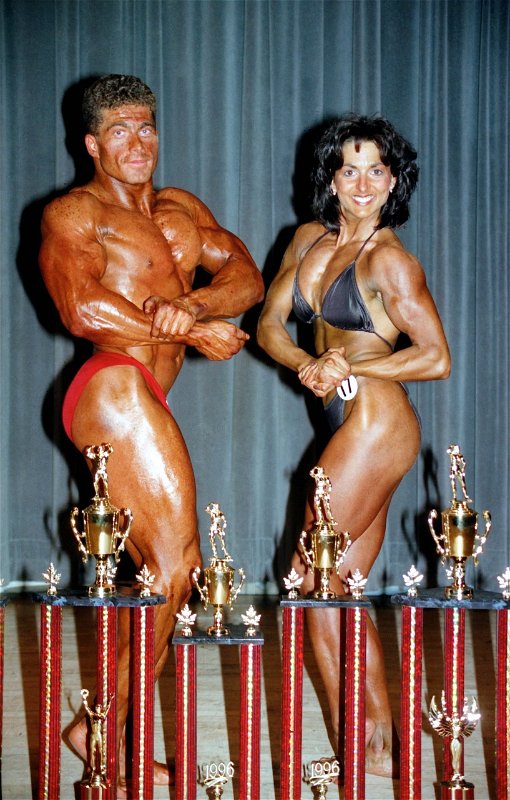 In 1995 the CBBF made a new policy eliminating regional championships as a national qualifier allowing athletes to qualify directly from their provincial championships. Our prestigious Atlantic Championships was now in jeopardy and no longer of significant value to competitors needing to qualify for the Nationals. Not wanting to see the end to such a great regional event, New Brunswick President Len Collette was convinced that if the show continued, then athletes would still compete. He felt that a lot of Atlantic competitors would still would enjoy competing inter provincially in a friendly competitive atmosphere.

The test came in 1996 when the NBABBA under Len’s leadership promoted and renamed the championship to The Atlantic Classic Bodybuilding Championships. His vision proved to be correct, as this event was a huge success with Nova Scotia’s Bill Mackie walking away with the Overall title. The Atlantic Classic had now found a home in the Moncton area and continued to grow for the next eleven years. When Len stepped down as President in 2006 our favorite spring competition was once again in jeopardy. Fortunately, the husband and wife team of Ti-Jean & Heather LeBlanc stepped up to the plate and promoted a very successful championship in 2007. 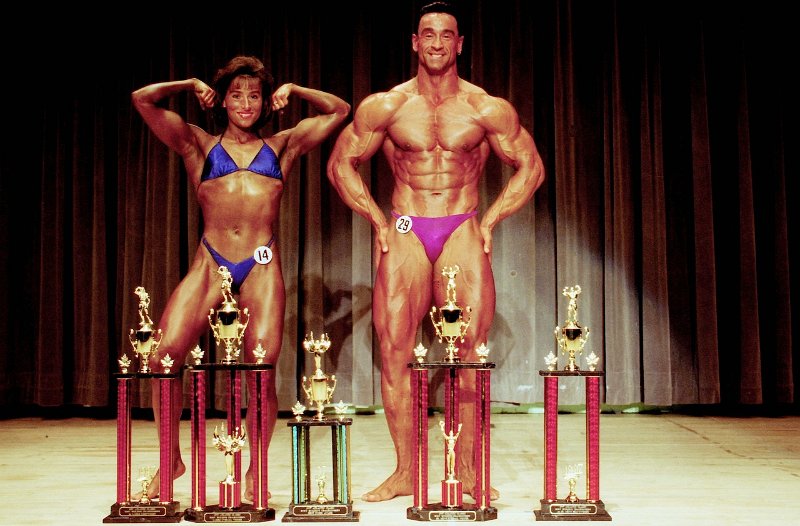 The spring of 2008 featured a fantastic 30th special anniversary Atlantic Championship promoted once again by Ti-Jean and Heather. Feedback from this competition was that it was the most fun and smoothest run bodybuilding and fitness event in Atlantic Canada’s thirty year history. Obviously, Ti-Jean and Heather’s hard work and passion for this long running competition has benefited many Atlantic athletes, fans, and sponsors as it continues to grow in size and importance. With this year’s 2013 35th anniversary event, I am anxiously looking forward to see what surprises Ti-Jean and Heather  have in store for us on April 13th!

Both Ti-Jean and I stood on stage as competitors back in 1978 and how appropriate that our love and passion for bodybuilding has enabled us to provide the same competitive opportunity for those who are willing to experience the thrill of flexing and displaying what they have worked so hard to achieve in the many hours spent in the gym. Jean and I are honored to be able to capture the same excitement and spirit for you guys that we shared over 35 years ago when we stood on the exact same stage. In Ti Jean’s case it is even more significant as 35 years ago he proudly hoisted the very first Atlantic Championship Overall trophy over his head in victory. 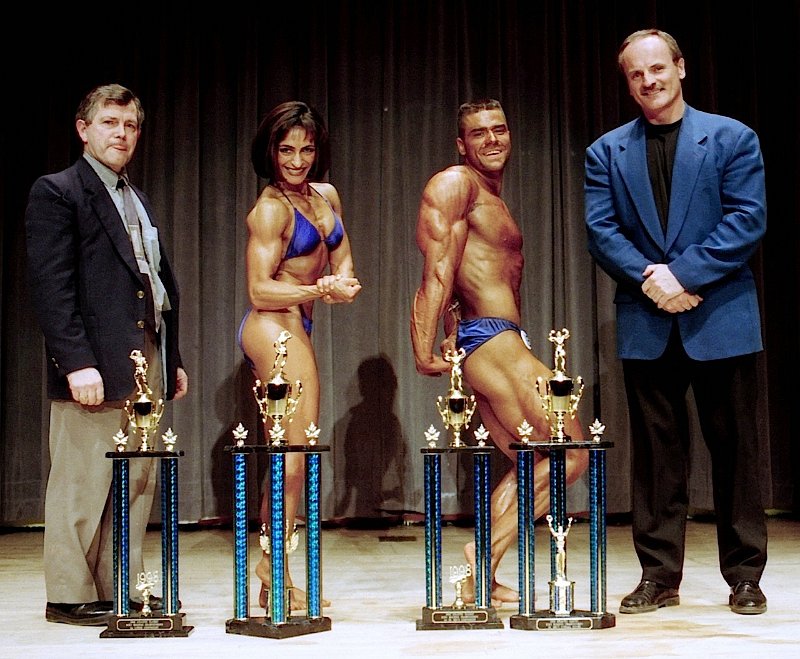 Driving to Moncton that day 35 years ago, I could never have imagined how far the journey would be! As I reminisce about all the Atlantic competitions I have witnessed and been a part off. I can’t help but think how lucky I have been. So many fond memories, numerous friends, exciting competitions, and shared laughs. Cherished things that money can’t buy. As I look over the long list of Atlantic winners I am saddened to see that some are no longer with us. It has been a great journey thanks to so many great Atlantic bodybuilders, fans and supporters.

I leave you with this advice, particularly for those of you who are competing this year. Savior and enjoy every moment, the time will go by in a blink of an eye, and someday you will also be wondering, where has the time gone? I just hope you will have the precious Treasure chest of memories to share with your loved ones that I have!